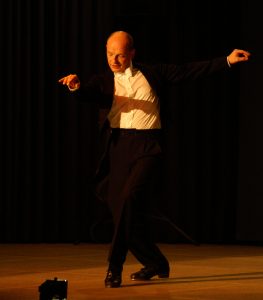 Uwe Meusel studied music and theatre and started tap dancing at the beginning of the 80s. He soon began to teach and in 1988 founded the Musical-TAP-Company, a studio devoted to the art of tap dance. He has reconstructed more than 100 classic choreographies and has studied with most of the American tap greats, working regularly for the last twenty years with Sam Weber (San Francisco). In 1995 Mr. Meusel spearheaded the founding of „German TAP“ and has been its president from 2001 to 2006. He also supported the ITA as its German representative. With his company and in collaboration with such diverse artists as Sam Weber, Vivian Kleiser, Andreas Dänel, Matthias Meusel, Bernd Dussler and Dunja Lenz he has performed in numerous shows, galas and festivals. During the last 30 years Uwe Meusel has produced 40 full-length tap shows in various theatres in and around Freiburg, and his repertory includes more than 300 choreographies. Uwe is also one of the leading tap dance historians in Europe, with one of the largest archives. As a teacher, he possesses a thorough knowledge of dance technique and musical theory and pays precise attention to rhythm, phrasing and terminology. Uwe is versed in all styles of tap and is featured at workshops in Germany, France and Italy. 2011 und 2012 he danced as Solist at various Presentations of the Sacred Concert by Duke Ellington. From 2011 Uwe Meusel started performing again as singer and guitarist. In 2016 he produced a portrait CD with Mario Hené which was published by Artist Station Records Hannover.
For the last three years Uwe Meusel has put all efforts into the documentation of the first 40 years of recorded tap dancing.

Here you can see some clips of him and his company:
https://www.youtube.com/user/taphistory