When Rusty Frank’s first edition of „TAP! The Greatest Tap Dance Stars and Their Stories 1900-1955“ came out in 1989, it was like a bible to tap dancers outside the USA. This time was a thrilling period for tap dancing and Rusty was right in the middle of it. The ITA had just been founded and tap dancing would be acknowleged an american artform.

Rusty had managed to interview a lot of tap dancers who would die soon afterwards, thus preserving history, before it was too late. She also fought with the publisher to have the extra resource pages with literature lists, filmography and a little discography included. These lists actually built a foundation for my growing tap dance archive. 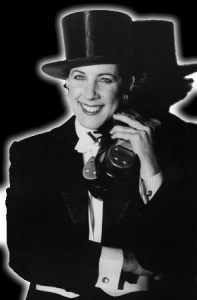 I also enjoyed Rusty’s video/DVD productions like the „Tapping with the masters“ series, which meanwhile you can get easily online without the high postage:
Rusty’s educational Tap Dance Videos – Shop

Since Rusty through her work initiated so much of my historical research, I always felt connected to her like to a mother. It has been some years ago, that I proudly told her about the upcoming project and I am very thankful for her encouragement as well as her support of this publication.