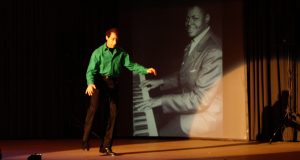 Sam Weber is an award-winning, internationally acclaimed performing artist, master teacher and choreographer who regularly appears throughout the world. A protege of Stan Kahn in San Francisco, Sam Weber has appeared with such tap legends as Charles „Honi“ Coles, Steve Condos, Jimmy Slyde, Gregory Hines and the Nicholas Brothers. Sam’s versatility has led him to performances in musical theater and television, where he has worked with such stars as Burt Lancaster, Bob Hope, Andy Williams, Pat Boone and Sara Vaughn. Sam co-starred in the award-winning German short film „Zwei Im Frack,“ directed by Christian Stahl in September, 2000. Sam has also performed with the San Francisco Ballet, Sacramento Ballet, Peninsula Ballet Theatre and Smuin Ballets/SF. Sam Weber was frequently seen on PBS’s „Mr. Rogers‘ Neighborhood“ television show and is featured in the documentary „Juba! Masters of Percussive Dance“ on Public Television.

Sam is the recipient of several awards, including the „Legacy Award,“ from San Antonio’s „Third Coast Rhythm Project,“ for his work as a teacher and performer. He has received the San Francisco Bay Area Tap Festival’s „Giant Steps“ award for his lifelong contribution to the development of tap dance in the Bay Area, and he has also received the prestigious „Juba“ award from the Chicago Human Rhythm Project in recognition of his outstanding contributions to the art of tap dance.

I have been lucky to work with Sam for more than 20 years in a row and we have shared wonderful tap times in Germany, often together with Andreas Dänel.
I am happy to have him in the boat for this exiting project so we all can profit from his outstanding knowledge and musicality.

More on Sam Weber you will find on his website:
http://samweber.org/